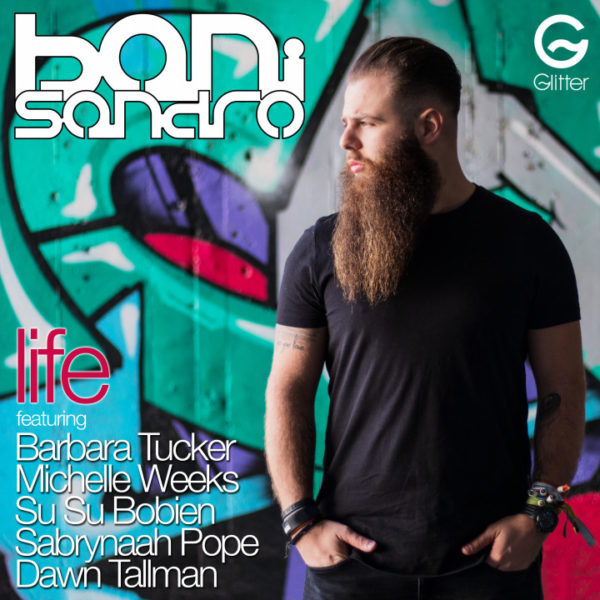 Loading tracks...
Update Required To play the media you will need to either update your browser to a recent version or update your Flash plugin.

Sandro Bani meets house divas.. LIFE is now! The evolution of house music, set to be exclusively released may 20th on Beatport under Glitter (Do It Yourself), and featuring the finest: Barbara Tucker, Michelle Weeks, Su Su Bobien, Sabrynaah Pope and Dawn Tallman!

(Brooklyn, New York) is an African American house and soul singer, songwriter and choreographer. Her music has influenced mainstream and dance music across the United States and throughout Europe. Tucker had six #1 hits on the US Hot Dance Club Songs chart in the 1990s and into the 2000s, and several hits in the UK.

(born Suzette Montgomery on November 4, 1970) is an African American gospel and house music vocalist. She lives in Newark, New Jersey. She has performed with the Harlem Gospel Choir. Bobien rose to fame on the domestic and international house music scene with her 1999 hit, “You Don’t Know” (1999), which remained on the DJ Play list for weeks. It had already been on the Billboard charts for six weeks by December 1998. She has established herself as one of the signature voices in gospel house music. Bobien has been inspired by many artists such as Tina Turner. Other inspirations include the Clark Sisters, Chaka Khan and Patti Labelle.

is an American soul, R&B and gospel singer marketed as “The Queen of Gospel Energy” by her record company. She was born and raised in Danbury, Connecticut, and started singing in church and later on was featured in a great number of R&B and dance recordings. She has cooperated with a great number of recording artots and DJs and made part of various ensemble groups traveling internationally.

(died September 24, 2005, New York City) was a female Dance/House vocalist from Brooklyn, New York. She was well known for her work with Dance acts 95 North, DJ Pierre, and most recently as part of U.D.A.U.F.L., which scored a number one track on the Billboard Hot Dance Music/Club Play chart with “Most Precious Love” in 2005. She also contributed her vocals to “Keep Hope Alive”, which was featured on the group’s 2004 album of the same name. Pope died soon after at her New York home.